“I don’t talk about it much.” Dr. Dan Raleigh spoke softly, his voice mellowed by his 97 years. “Not many people are alive anymore when it happened.”

The “it” Raleigh refers to so humbly was Pearl Harbor Day. On the morning of December 7, 1941, he had just taken his post as officer on deck aboard the U.S.S. Maryland at promptly 7:45 a.m. Hearing engines above Ford Island, he lifted his field glasses and caught the image of about nine planes flying in “V” formation high above in the blue morning sky.

He explained he had not been trained on identifying Japanese aircraft, and when he saw the bombs drop from the craft, he thought, No one is supposed to be practicing this morning.

Then the first bomb exploded on Ford Island.

“So I told the bosun of the watch to sound general quarters. He came over the bullhorn and said, ‘All hands man battle stations. This is no shit.’”

Hustling to action, Raleigh cut the small wire that locked the ammunition to disperse the much-needed weapons. He coaxed the black sailors, who at that point were only allowed to be cooks, to perform their wartime duty of going down below deck and bringing up more ammo. And by the time his captain arrived on deck wearing just his skivvies topped with his “scrambled eggs” hat—his hat with captain’s insignia—Raleigh was firing nonstop.

“The captain put his hand on my shoulder and said. ‘Slow down, son, we might be at this for weeks.’ But I just couldn’t stop firing.”

Raleigh spoke of the day clearly, with sad eyes, recounting his vision of Japanese pilots’ faces and their smiles as they whizzed by, bringing death and destruction. He remembers the mayhem, staying on deck into the night, the palpable fear that hardened their hearts, adding to the nervous reaction of so many of the men. 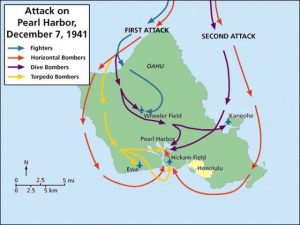 Tension filled the black night. When four US planes sent from their aircraft carrier appeared over Ford Island preparing to land, the night lit up like the 4th of July. Before anyone could stop the explosive response from the ground, two of the US aircraft were shot from the sky.

“They called that friendly fire. It was terrible. But I’m proud that no one from the Maryland fired on those poor guys.” He smiled bleakly and quickly added that the U.S.S. Maryland was credited with downing four enemy planes.

And though there are few of us who were alive when this world-changing day broke bright and beautiful across the calm, sandy beaches of Hawaii, we must cherish the memories of all who served so bravely.
I for one am ever grateful not only for Dr. Raleigh’s service, but that he shared his stories of his ship, his turning point in life, his memories that burn deep.