The very few living survivors of the ‘First Wave’ at D-Day all concur on one thing—tragic mistakes were made that morning of June 6, 1944, costing thousands of Allied lives.

For starters, the landing parties headed ashore later in the day than planned. They missed the opportunity of the lowest tide and the deeper water would claim hundreds of young lives.

For many, this was their first battle, fresh from their training grounds these soldiers were to attack the battle hardened, dug in enemy. The Germans had prepared the beach with land mines, barbered wire, barricades and a strip of heavy wire that ran across the surf impacting the landing crafts.

Just before the troops were sent ashore, Allied planes flew low across the beach laying down a protective smoke screen. However, this screen worked in reverse for many of the landing parties creating confusion as they could not tell where they were heading. Eventually, when the winds lifted the film, the Germans sitting above on Omaha Beach in their pill boxes made light work of the wet, anxious soldiers below them. 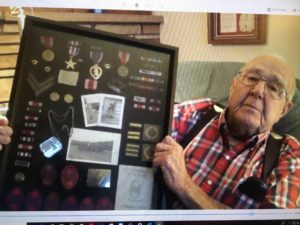 ‘Artillery Joe’ Mehelich, Private First Class, was a young man among the brave soldiers that survived the ‘First Wave.’ Previously, Joe had arrived in Africa to fight with the 2nd Armored Division at age seventeen, months before the attack on Pearl Harbor. At one point, Joe was hit and forced to pour sand over his body to extinguish the leaping flames spreading up his arms and over his boots. While severely burned and unable to wear shoes, he got ‘right back in the tank’ and kept fighting on. In fact, ‘Artillery Joe’, the nickname given to him by his troop, would go on to fight in all five major battles.

After his company helped secure Sicily, ‘Artillery Joe’ was sent to England for the major assault of D Day. He and a fellow soldier from his company were placed in a DUKW, ‘Duck’, for the landing on Omaha Beach along with about 38 green ‘kids’. The two experienced warriors were there to provide calm for the novice soldiers unaccustomed to battle, to the deafening blast from the enemy’s heavy armor on the cliffs above attempting to sink their transport, and the unnerving number of injured and dying men washing ashore along the sand and surf.

The result was horrific. Frightened, praying, calling for their mothers, the youth rushed over the sides, some carrying their duffel bags, into the chilling deep water only to be pulled under the rough sea by the weight of their supplies needed to defend themselves.

Joe tried to stop them, but their fear and duty to America stripped them of reason.

Only Joe, his friend from his original company and one of the boys from the boat made it to shore. As the three determined which way to head in the dense haze, it began to lift, and they came under attack from a barrage of gunfire from the Germans waiting above in their pill boxes. Miraculously, all lived to fight another day.

In the midst of D Day, a young John Joachims fearlessly drove his tank into battle at Normandy. He was eighteen. He would often retell of the horror spread around him on the beach, such a place of beauty transformed to a graveyard of overwhelming magnitude. 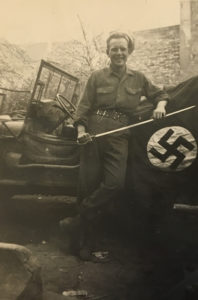 The special regiment, the 320th Anti-Aircraft Barrage Balloon Battalion, were trained to handle the large hydrogen filled barrage balloons that floated at about 200 feet, to protect the soldiers and tanks coming ashore. They were the first African American unit to land on D Day and the only balloon unit in France. Although Waverly B. Woodson Jr., an injured medic, was nominated for a Medal of Honor, he never received the medal.

The first twenty-four hours of ‘Operation Overlord’ claimed thousands of lives. Those lost souls were not only Americans, but also our Allies, the Canadians, the British, and the French. One report claims, between June 6th, 1944 to July 1st of that year the United States casualties totaled 22,119. Missing, possibly some of the young boys swept out to sea, tallied 5,665 American soldiers. A startling 2,811 were killed with 13,564 reported wounded. Of the 79 taken prisoner, their eventual fate is not listed. Many of the dead never fired their guns.

The drudgery of ‘Operation Overlord’ would last until August 25, 1944. Bob Harman, made it ashore in early August, as the troops were breaking out of Normandy on their way east. Far from being a secured safe zone, Bob remembers the first person he witnessed being shot by a sniper. The German sharpshooter had killed a Medic. Bob instantly understood the brutality of the enemy. The Germans wanted to eliminate anyone who could bring aide to an injured soldier or the dying. To this day, Bob honors the fallen Medic by displaying his blood-stained white arm band with the red cross in a beautiful glass case. Bob carried the Medic’s arm band through many clashes, including the Battle of the Bulge, as a reminder that survival in war is rudimentary: kill or be killed.

If you have not stood on the cliffs above the designated area called Omaha Beach, where the most difficult landing occurred, or walked the sands of Normandy, be sure to do so. The wind-swept surf carries a hint of the souls lost in this devastating conflict. You will be moved beyond imaging.

On this 75th Anniversary of D Day remember those who gave their all to defend our country and freedom.

Remember that during World War II, on June 6, 1944, this victory for our freedom came at the most precious price–
brave young lives.