The best of teams analyze their opponents before entering into any competition with them. To deliver that winning blow takes risks.

Not unlike the risks taken by the United States to end World War II.

Japan refused to surrender even in their obvious defeat as a nation that was starving, with dwindling resources for continued battle after their years of attacking numerous countries. They ignored the warnings sent by the U.S. and continued to ready their men, women and children to fight against an allied invasion of their impoverished Land of the Rising Sun.

The Germans had already surrendered in May of 1945. Immediately, the U.S. turned its focus from the European Theater to the Pacific Theater considering how to persuade the Japanese to lay down their guns.

Taking the helm after the death of President Roosevelt, President Truman and his military brass had to consider the enemy. They were facing a nation who believed their Emperor Hirohito was a god, and a military that was built by Prime Minister Tojo, whose goal, at any cost, was to provide Hirohito an expanded empire. Thus far, Japan had enslaved, murdered, raped, mutilated, beheaded, imprisoned and tortured their captives. It was apparent that the Japanese held themselves as racially superior, their xenophobic attitude toward westerners left little mercy as their notorious brutality became world renown.

In December of 1937, without provocation, in a three week span, 300,000 Chinese were butchered by the Japanese military. This included the serial rape of over 20,000 women who were then bayonetted to death or murdered. In one of many accounts during the Rape of Nanking, there was a competition to see who would be the first Imperial Japanese Army officer to behead 100 innocent people.

Thus, in 1941, when Prime Minister Hedeki Tojo, known as The Razor, lied to the U.S. about seeking peaceful solutions while preparing to break military law and attack Pearl Harbor without warning, the world was already aware of Tojo’s brutality. He had structured his notorious Kempeitai, which translates as ‘law soldiers’, after the German Gestapo, and empowered them to become one of the most sadistic military police ever, feared even by the ordinary Japanese. 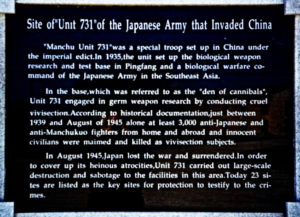 Tojo had his scientist’s begin to investigate ways to efficiently kill more people and created Unit 731 to explore chemical and biological warfare. In the name of science 12,000 POWs, Chinese, men, women and children were used for live experimentation. Their deaths were brought about through cruel, unimaginable methods.

However, as Tojo had never signed the Geneva Convention, all of these murders were inconsequential, only a step to his goal of expansionism and building a Japanese Empire. He openly promoted hatred for foreigners. In the military manual he wrote for his troops, he stated that surrender was a dishonorable act. Therefore, his army showed little mercy to their captives and every place they occupied experienced death at the hands of the vicious invaders. Locals, nuns, priests, doctors, nurses and, of course, the allied soldiers fell prey to an indoctrinated killing machine.

After the Japanese first naval defeat in 75 years at the battle of Midway, Tojo announced to the country that the ‘way of the samurai’ was the only path to the successful building of the new empire. All must be ready to die, including women and children. Children were given uniforms and wooden guns for practice, they trained crawling under barbed wire until their elbows bled. These children were rarely provided with food and were issued a bag to sleep in–anywhere they could find to rest.
In February of 1944, to further his need for power, and to regain his favor with the Emperor after the defeat of Midway, Tojo ignored the fact he had had very little battle field experience, and got rid of the head of the army. With little experience, only his overblown ego, he allowed his armies to starve, pushing them into unrealistic situations. He leads with the tight reigns of fear and spread the message that to commit harakiri is preferred to surrender, to die in a kamikaze attack is to die a hero, one is simply a disposable subject of the emperor.

When American troops took Saipan, the stepping stone to the Japanese islands, they watched in horror as 20,000 civilians committed suicide at the order of Hirohito and Tojo. Mothers threw their babies off the ‘suicide’ or ‘banzai cliffs’ before jumping into the cresting waves that would drive them against the large boulders below along the shoreline of Saipan. It later would be realized that the rulers of Japan worried that if the civilians discovered that the U.S. soldiers were not going to rape and kill them, but would instead feed them and provide medicine, there might be some uprisings in the Nippon battle-weary homeland.
How to stop this Japanese killing machine with the least loss of lives for all warring opponents was the most important decision facing our President and other world leaders.

I interviewed Mike M., born in Osaka, who at age 14 understood his fate was to die for his country. He had already served in the Imperial Japanese Army for 1 ½ years and, as the allied troops drew nearer, he prepared for the “kessen” last decisive battle on Japanese soil. He told me the bombs dropped by the Enola Gay saved his life.

In an interview with Barney McCalum he explained how the vision of the hundreds of the battle ships in the fleet gathered off Hawaii, preparing to attack Japan, made him realize the prospect of the countless lives that would be lost.

While Japan starved, had endured weeks of fire bombings, which killed more than the atomic bombs would, had very few planes, ships and military supplies left, in face all of this devastation they still resisted surrender. 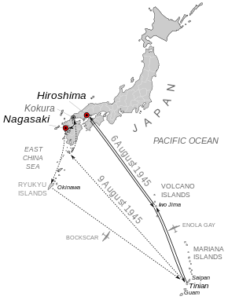 After dropping the first bomb on August 6, 1945, Little Boy, on Hiroshima, and warned there were more bombs, Japan still did not tender any form of surrender. Three days later, in a last ditch effort to end the war, with American soldiers at the ready for a land attack, a second bomb, Fat Man, was dropped on Nagasaki.

When the U.S. troops landed on Japanese soil, it was with the intent to help rebuild the devastated country. They brought food, medicine and the willingness to reach across the battle lines to provide aide and the restructure of the foundation for today’s Japan.

On that early Sunday morning of December 7, 1941, when Japan attacked the United States, drawing them into the world war, it would have been hard to imagine that an estimated 407,300 American military personnel would die before the wars end. This number does not reflect civilians.

We must realize that given the times and the situation, the choice was difficult. Peace came at a heavy price to all countries. We were truly a world at war, a situation we should never become embroiled in again. We have learned the potential of the atomic bomb and should not go forward lightly with the intent to recreate this event.

Most importantly, for those brave men and women who fought, worked, died, sacrificed and suffered to bring us the freedom we have known since VJ Day, Victory over Japan Day, August 14, 1945, we must give our unending gratitude and promise to always seek peace over war.

On Friday, August 10, 1945, Emperor Hirohito urged Japan’s War Council to submit a formal declaration of surrender through ambassadors to the Allies. Even though Japan’s war causalities had been great, most of their fleet destroyed and their people were starving, it took a second atomic bomb, dropped on Nagasaki, three days after Hiroshima, for Japan to finally make the decision to surrender. However, the surrender was not formally announced to the land of the Rising Sun until August 14, 1945. And over that four day time period, east of Okinawa, a Japanese submarine sank the U.S. landing ship, the Oak Hill, and a destroyer the Thomas F. Nickel.

When the announcement hit the air waves the afternoon of the 14th, that the Emperor had already accepted and recorded the terms drafted in the Potsdam Declaration for unconditional surrender, which had been submitted by the U.S., Britain, and the Nationalist Government of China on July 26th 1945 after Germany surrendered, the reaction by many Japanese was anger. The Imperial Palace was stormed by over 1,000 Japanese soldiers seeking to destroy the proclamation. Faithful warriors, loyal to Emperor Hirohito, repulsed the attackers.

However, it did not stop General Anami, the member of the War Council greatly opposed to the surrender, from committing seppuku, a warrior’s suicide ritual.

On the American homefront President Harry S. Truman declared, “This is the day we have been waiting for since Pearl Harbor. This is the day when Fascism finally dies, as we always knew it would.”

Alfred Eisenstaedt’s iconic photo for Life Magazine of a sailor kissing a nurse in New York’s Time Square captured the overwhelming sense of relief and joy of the Allied nations emerging from the turbulent years of a long and bloody war.

While August 14th and 15th are the actual “V-J Days”, September 2nd 1945 is also considered “Victory over Japan Day” as it marked the formal signing of the official Japanese surrender which took place on the U.S.S. Missouri while anchored in Tokyo Bay.