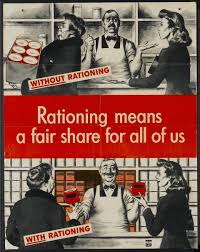 Rationing goes back centuries, especially in times of war, strife and shortage. The concept is simple and established to prevent hoarding of any items deemed necessary for survival or to overcome the source of infliction. This action is usually enforced by the government in an attempt to direct the needed supplies to those on the front lines first, then to establish a system for distribution to the masses.
In troubling times, learning to share and be responsible for limited access to certain products can be life changing. The Great Depression left a scar on many of my parents’ generation as every scrap was used, saved or converted into something practicable. 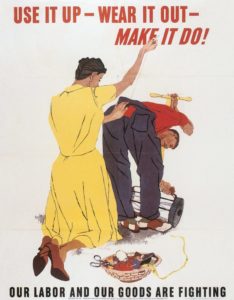 Even before the Japanese attacked the United States on December 7, 1941 at Pearl Harbor, blasting us into World War Two, rationing in Britain had been established. The British Ministry of Food issued Ration Stamps, while imploring America to consider rationing of vital aluminum, gasoline, steel, food and materials necessary for battle.

The ‘Sugar Book’ – War Ration Book Number 1 – arrived on the U.S. civilians’ doorsteps on May 4, 1942, five months after we joined the Allies in global combat. Coffee was rationed by November 27, 1942 with households limited to one pound every five weeks. Before the end of that year nine other essential items were added to the ration coupons. 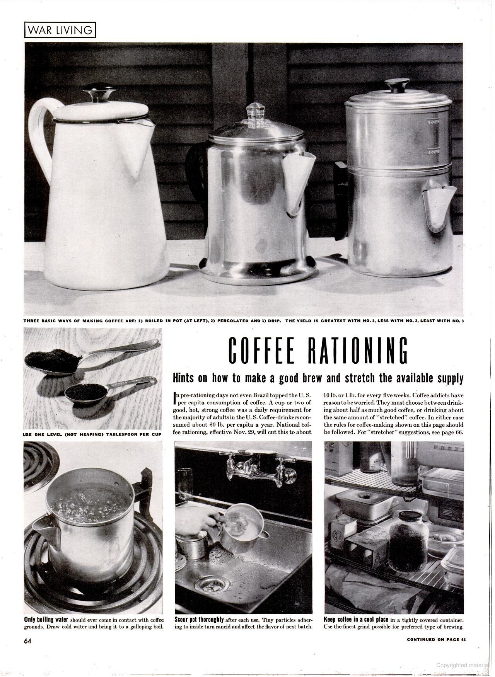 Remembering that women of all ages wore dresses during the 1940’s, only to have nylons become scarce during wartime, is a prime example of American ingenuity. The ladies got creative. They rubbed their legs with a coloring then drew lines up the back of their calves imitating the line of the nylons to give the appearance they wore stockings.
When I asked my mother about this, she pointed out how the leg coloring wore off on her white dental assistant uniform. In her early twenties, she scrubbed her uniform nightly keeping it as spotless as possible while attempting to maintain a sense of fashion.

Shoes were rationed as the materials were needed for boots to hit the ground overseas. One woman I interviewed, Barbara Bradford, told me when she was about to be married, as a gift, a family friend gave her a precious coupon to purchase new shoes. Her father became angry when she came home with sandals, not a pair of practical shoes she could wear year-round.
Gas masks were not only issued to those in battle, but also to civilians in the event of an attack. Children to grandparents wore them. The masks offered hope, survival, not shame or ridicule.

In 1966 I was lucky enough to spend a summer with a girlfriend while she visited her grandmother in Hawaii. Returning, I brought with me what I thought to be an item our family need to add to our menu. Spam.
The can didn’t even make it to the shelf. My father, Second Lieutenant Joseph Frisino, having survived two years in the jungle of Burma during WWII, serving in the Signal Corps, turned beet red with anger.

“Get that out of here.” He instructed me.

Shocked by his reaction to a food item, I looked to my mother for help. She just shook her head in warning. The canned good was never opened but was escorted out the back door by Dad.

Years later in my research I came to realize that during the China, Burma, India conflict, the CBI, food was airdropped into the jungle to the troops. If the Americans made it to the packages that floated on parachutes toward them–before the enemy–aside from the K-Rations, they found Spam. Their diet consisted on what could be scavenged or the limited availability of canned foods.

Gas rationing happened again here in the United States as a result of the 1973 Oil Crisis. Depending on your license plate ending in an odd or even number determined which day you could go and sit in a long line at the gas station in the hopes the pump did not run dry before you put some in your tank. Even then, nurses and doctors were given priority so they could make it to their demanding jobs. At that time, I was living in Los Angeles and would trade cars with my cousin, a nurse, so I could sit in line to fill her car for her. 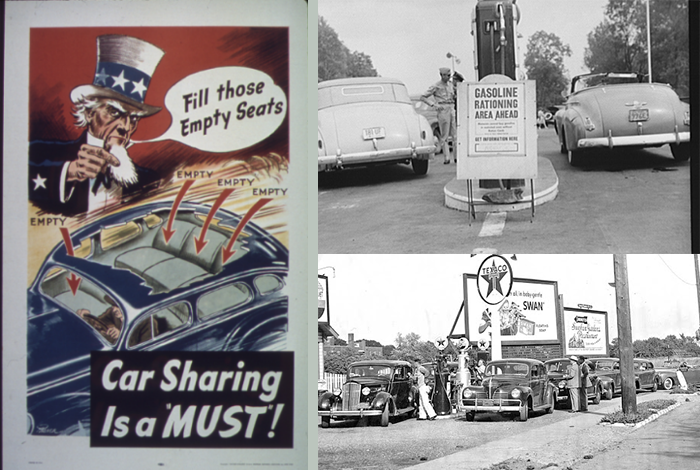 In WW2 the rationing lasted from 1941-1946 when the men and women from all services became the main focus as they fought for our freedom and our future.

During the 1973 Crisis, a time of shortage and rationing, American Know-How jumped into action to prevent hoarding to be certain gas was made available rationally, not emotionally.

Today the front line has shifted. Those in the trenches are the care givers, nurses, doctors, ambulance drivers, police firefighter and now some of our military who lead in the battle for lives against the Coronavirus, COVID-19.

Yes, we are in this together. However, sheltering in place, curfews, wearing masks and rationing are not new concepts but proven safeguards.

Following these simple rules issued for this drastic time is essential to regaining our health so we can gather when the bans are lifted and for the regrowth of our economy.

The ‘America Way’ still exists. There are countless reminders of those reaching across aisles, fences and diversities to help. In fact, it has become stronger of late, prominent in every action of those who listen to the Public Health officials and Governors, such as mine, Jay Inslee, who are acting to halt the unseen and unforgiving threat of this virus.

Thank you to all of those throughout our great country who wear the new uniform of the soldier, unrecognizable with faces shielded, who fight night and day to save lives. You are our heroes. 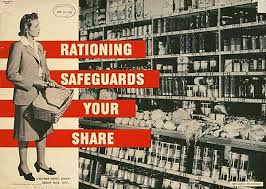