Having fought gallantly for four months, weak, starving, sick, exposed to the burning heat of the Philippines, roughly 60,000 Filipino troops and 11,000 – 15,000 men from the United States surrendered to the Japanese on April 9, 1942 on the peninsula of Bataan. A fate that would claim 5,000-10,000 Filipino soldiers and about 650 American lives along the march. The numbers vary due to the inability to get an accurate count of how many actually were captured at the largest surrender of American forces since the Civil War, coupled with those soldiers who were able to escape. While the numbers might differ, the manner in which the brutal slaughter of Prisoners of War occurred is documented and rememApril 9, 1942of the worst, most egregious, displays of inhumanity in the Pacific Theater during WWII. 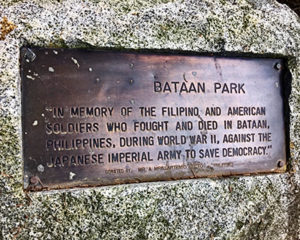 Araw ng Kagitingan, Day of Valor, is currently celebrated with prayers and laying of wreaths at statues and plaques across America and in the Philippines commentating the thousands of souls lost to a hostile enemy. Manila was first attacked on December 8th 1941, with the international date line that was December 7th, 1941, in U.S. time, the same day as the attack on Pearl Harbor. Outnumbered, with ill preparation by General McArthur, the country of the Philippines was the last to surrender to the Japanese in Asia with the fall of Corregidor on May 6, 1942. END_OF_DOCUMENT_TOKEN_TO_BE_REPLACED

The heavens were clear the evening of February 24, 1942, but Los Angeles, California was on high alert.

The Japanese enemy was lurking in the waters off shore, somewhere.

At this point during World War II, the Japanese forces had swept through Asia, Burma, into parts of Borneo, with the Philippine Islands swiftly falling. Japan appeared to have the upper hand, with little resistance. Eight Japanese submarines had spent much of December 1941 scouring the waters along the West Coast of the United States, destroying ships and killing six men.

The night before, on February 23, as President Roosevelt gave one of his many fireside chats to America, the Imperial Japanese Navy submarine, 1-17, surfaced to shell the Ellwood Oil Field, just over one-hundred miles to the north of L.A. More nerve wracking, an eye witness of the attack on Ellwood claimed the submarine, and its fire power, headed south, more than likely to the larger target, the City of Angels. END_OF_DOCUMENT_TOKEN_TO_BE_REPLACED