The heavens were clear the evening of February 24, 1942, but Los Angeles, California was on high alert.

The Japanese enemy was lurking in the waters off shore, somewhere.

At this point during World War II, the Japanese forces had swept through Asia, Burma, into parts of Borneo, with the Philippine Islands swiftly falling. Japan appeared to have the upper hand, with little resistance. Eight Japanese submarines had spent much of December 1941 scouring the waters along the West Coast of the United States, destroying ships and killing six men.

The night before, on February 23, as President Roosevelt gave one of his many fireside chats to America, the Imperial Japanese Navy submarine, 1-17, surfaced to shell the Ellwood Oil Field, just over one-hundred miles to the north of L.A. More nerve wracking, an eye witness of the attack on Ellwood claimed the submarine, and its fire power, headed south, more than likely to the larger target, the City of Angels.

For the first time the U.S. mainland had been shelled. American confidence had, once again, been pierced. 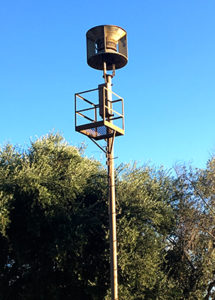 After the President’s talk, loyal Japanese-Americans claimed there would be retaliation for his fireside chat–the next night. Convinced of another assault, U.S. Naval Intelligence issued a warning alleging such a strike might occur within a ten-hour span. The U.S. Army took all precautions preparing its forces along the coast at the surrounding battle stations, such as Fort McArthur. More importantly, the newspapers were allowed to report the pending situation, and a state of readiness was imposed across the city. The citizens along the California coast bravely prepared for the possibility of another shelling from the Land of the Rising Sun.

It was approximately 7:20 p.m. when this first air-raid alarm screeched though the night of February 24th, heightening tensions, with a full blackout being ordered. After two heart throbbing hours, the alert was lifted. The residents of L.A. drifted to sleep, aware that the massive search lights for locating enemy aircraft and the surrounding batteries armed with large anti-aircraft guns for coastal defense, were manned and ready.

Yet, sleep was not to be attained. At approximately 2:15 a.m. on February 25th all batteries were put on Green Alert when radar picked up an unidentified object just 120 miles west of Los Angles. A new blackout was ordered, and, in the ensuing darkness, information stations were flooded with phone calls from panic-stricken voices insisting “enemy planes” had been spotted.

Minutes before 3:00 a.m., a colonel with the coast artillery reported “about 25 planes at 12,000 feet.” Then just after the hour, a red flare, carried on a balloon drifting over Santa Monica, set four batteries of anti-aircraft artilleries ablaze. Battery stations across the city pointed their guns toward the heavens firing at their own anti-aircraft shells exploding above, which to some, took on the shape of air planes.

“The air over Los Angeles erupted like a volcano.” 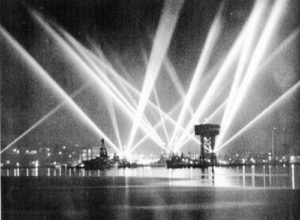 As the air-raid sirens continued to shatter the darkness, some residents hid, others climbed on roofs or poured into the streets to watch the sky above erupt with the ack-ack of powerful guns caught in the illumination of the massive spot lights weaving through the black heavens. The air-raid wardens hurriedly went about their duties, police kicked in doors and windows to extinguish lights, cars careening though the dark pandemonium took their toll.

Over the next three hours the wild reports streamed in, “swarms” of planes, one, no hundreds, flying low, fast, slow were witnessed. The ever-changing frenzied accounts finally dwindling with the dawn.

1,440 rounds of anti-aircraft ammunition were shot at an enemy who never arrived. The fallout of the shell fragments across the city inflicted damage to homes, cars, and various businesses. The real tragedy came with the reported five deaths, three by auto accidents on the darkened streets, two of heart attacks. 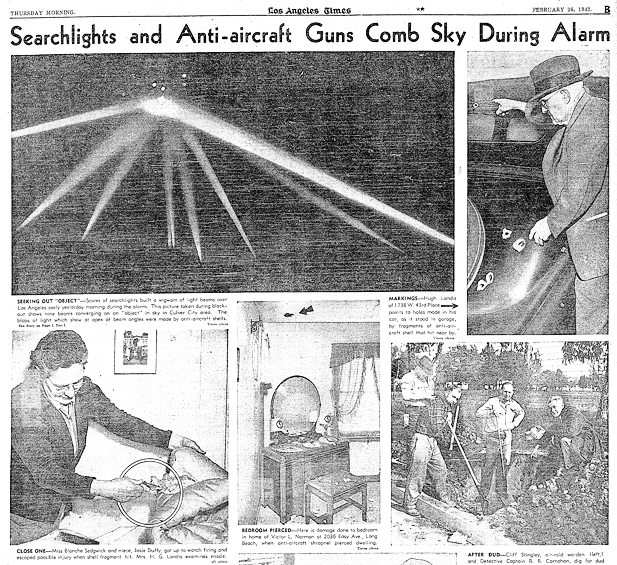 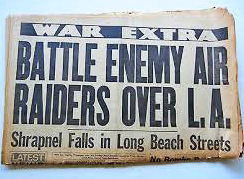 While in the morning light the shell casings proved to be great treasure for those who roamed the streets collecting them, the ‘Battle of Los Angeles,’ the ‘Great Los Angeles Air Raid,’ created national concern for preparedness. When the Secretary of the Navy, Frank Knox, made a public statement that the raid was a ‘false alarm,’ congress was outraged. No enemy planes were ever found. After a lengthily investigation, and wild rumors of UFO’s and other assertions, it would be eventually reported that weather balloons set the jitters in motion.

When rumors spread, and fear grows, reason is easily brushed aside.

However, for the people of L.A., knowing their coast had been attacked the night before, with the air-raid sirens blaring around them, massive guns firing from various directions, searchlights punching the sky with intensity, the situation was very real.

In fact, other Nippon subs, like the 1-17, which was also capable of launching an airplane, would indeed return to do more damage along the West Coast.

The facts prove–the Japanese enemy was lurking in the waters off shore.